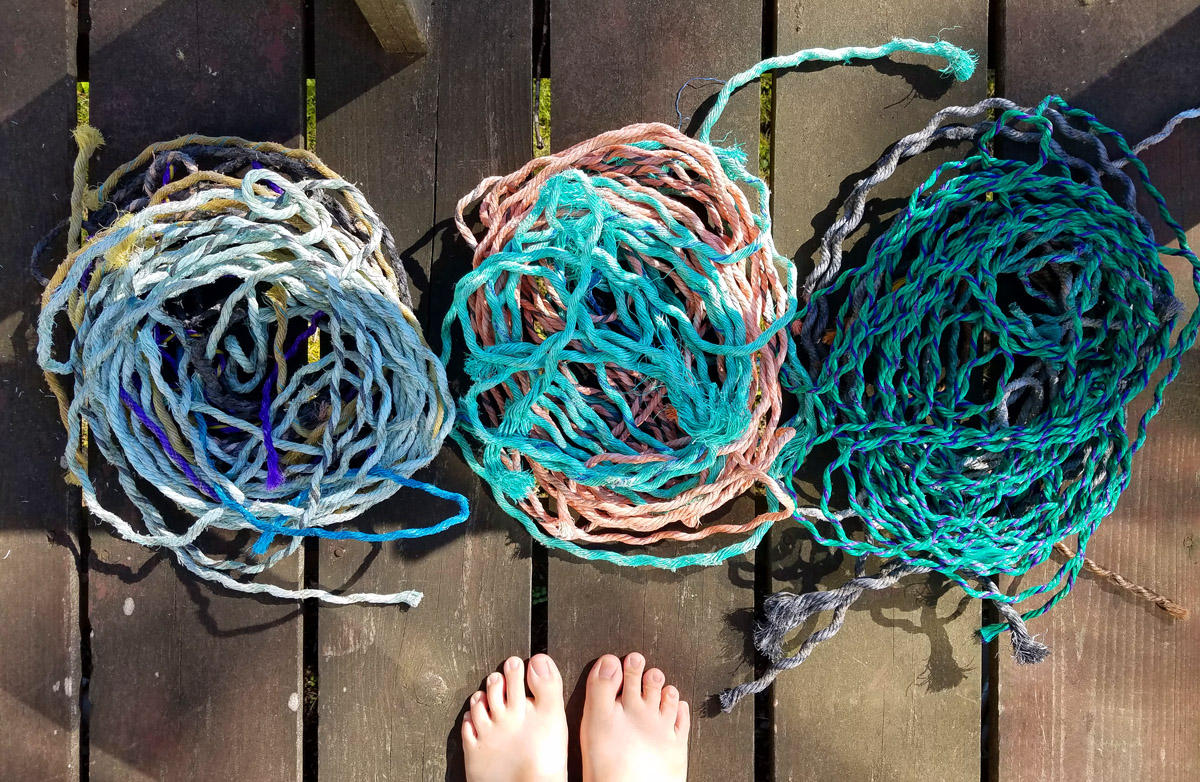 It begins with days spent hauling rope from the tideline in all weathers, connecting and collecting from other beach clean-up crews. A quick soak in water to loosen the sand, mud, and surface grime, then the long, meditative process of untangling knotted nests into their separate lengths. Each length slowly unwound by hand into its three segments, a second longer soak and scrub in hot soapy water, and a final rinse where the water runs clean.

Only now is the material ready to be stitched into baskets.

Rope baskets from my first series, 2015.

In 2015 I created my first set of rope baskets in Maine, experimenting with colorful rope I pulled from the kelp beds stranded on the shoreline. Their source was the local lobster fishery: long, single lines of rope leading down to lobster traps, cut loose by passing boat propellers. Lobster traps are everywhere in the sheltered coastal waters of Maine, each fisherman using a different color-coded rope to identify their lines.

I learned the basket-making process on my grandmother’s vintage Singer sewing machine, an all-metal champion that powered through endless lines of thick, fraying rope day after day. 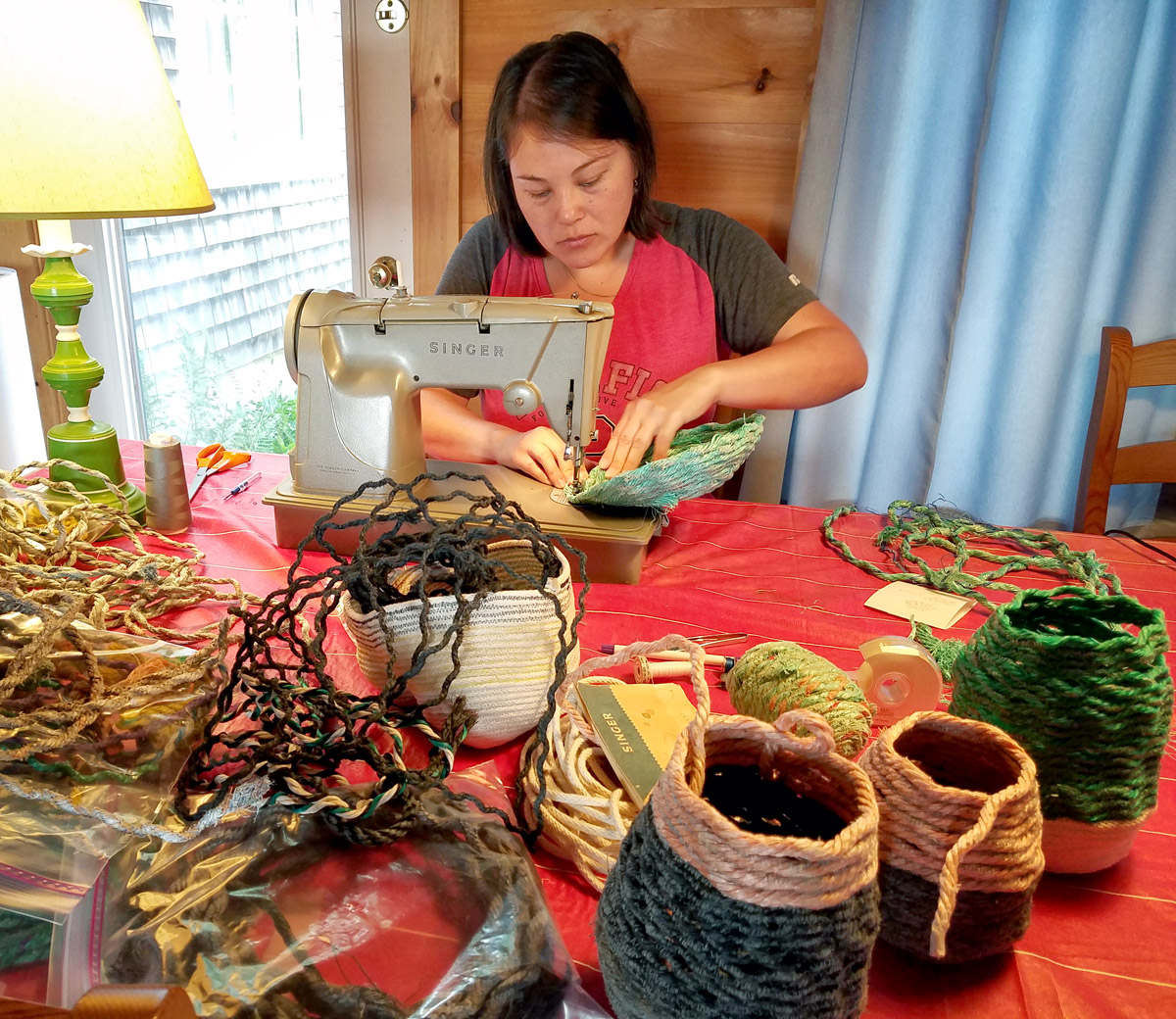 In 2017 I was invited to create a second set of baskets for my solo exhibit “Water and Form” at the 510 Museum in Oregon. I returned to Maine and my grandmother’s sewing machine, emerging with a new set of baskets that interpreted the layered color palette of the Maine coastal landscape using the colors of rope I had found there: Pink Granite, Foggy Coastline, Sand Beach, Mid-Tide. 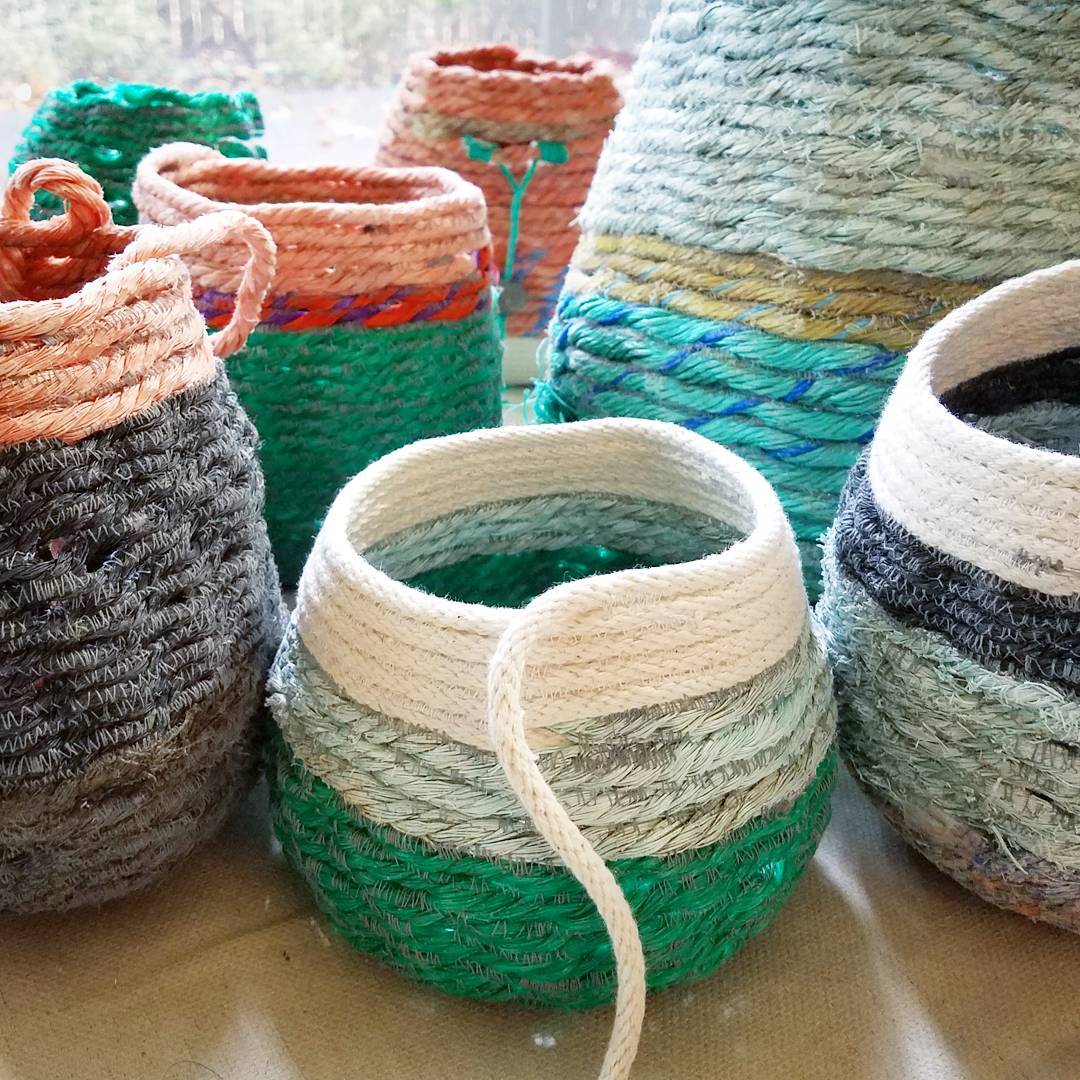 Baskets in progress from my second series, 2017.

I decided that my third series would use rope collected from the Pacific, reflecting the huge issues of ocean pollution I have seen along the Pacific coasts from Oregon and California to Hawaii. I connected with people up and down the Oregon coast to set aside rope from their beach cleanups. In February I made an overnight trip to pick it all up, and to collect even more from the shoreline near the Peter Iredale shipwreck in Astoria.

I found that the Pacific rope was wilder and more eroded than the rope from Maine. Some newer, cleaner pieces were tagged with orange markers from local Oregon crab boats, but other pieces showed the wear and tear of long exposure at sea.

Untangled rope from Japan, collected on the Oregon coast, 2018.

One tangled, stinking mess, covered in gooseneck barnacles, held a line of round plastic floats stamped with Japanese characters. After a long soak in bleach water, I separated the mess into its constituent parts: a thin, strangling net of monofilament, a wide, soft braided blue-gray rope, a bundle of short thin teal cords, and finally the line of floats pulled free from all the others.

The monofilament net was impossible to extract in one piece. It wrapped too tightly around the other ropes, each tiny knot snagged on all the others, creating a snarl with no beginning or end. It was one of the few pieces I had to actually cut apart.

I had high hopes for using a thick, bright blue rope collected near the Peter Iredale shipwreck, but it crumbled in my hands as I unwound it, disintegrating into tiny fragments of blue micro-plastic. 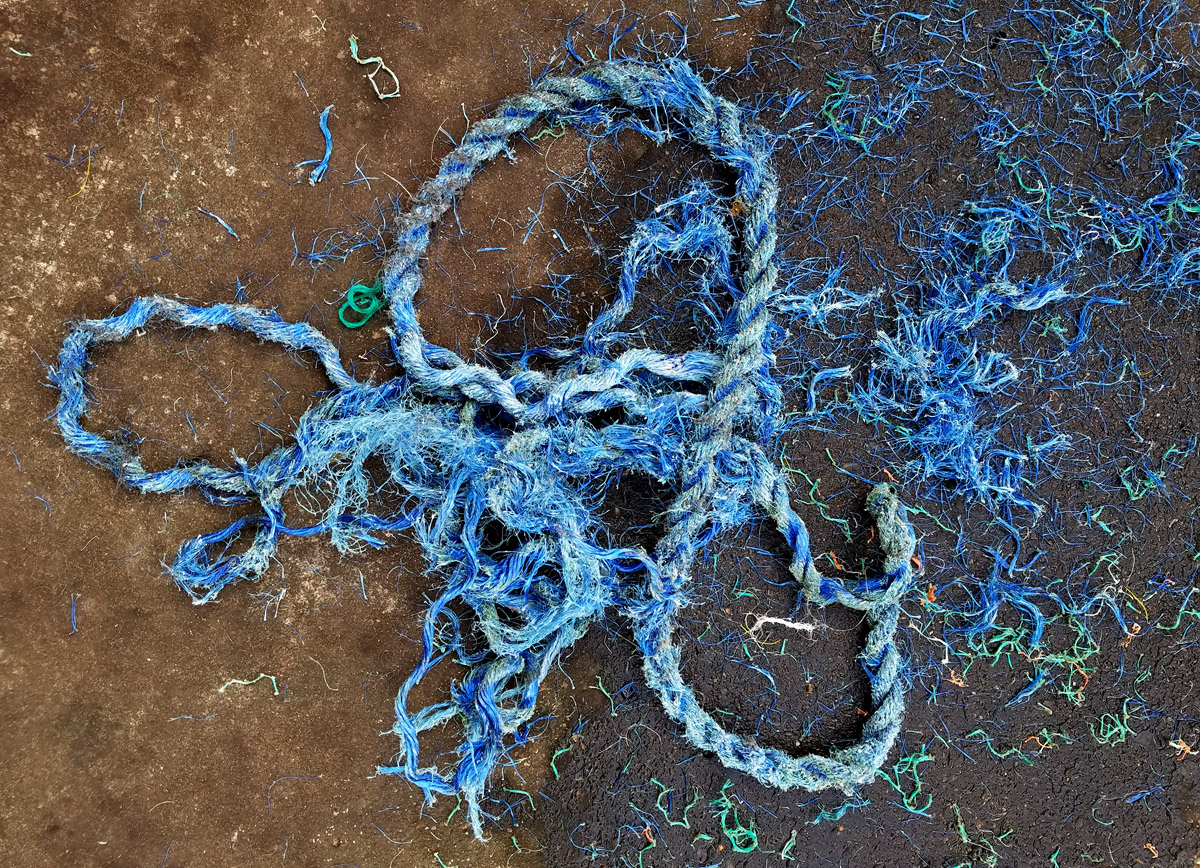 At the end of February, during a visit back to Kauai, I gathered rope from the collection site of the local Surfrider chapter. The group had picked up two tons of fishing rope just in the past two months. The massive pile of tangled rope was nearly as tall as me, and dozens of feet long. It created an entire environment of climbable hills and valleys. 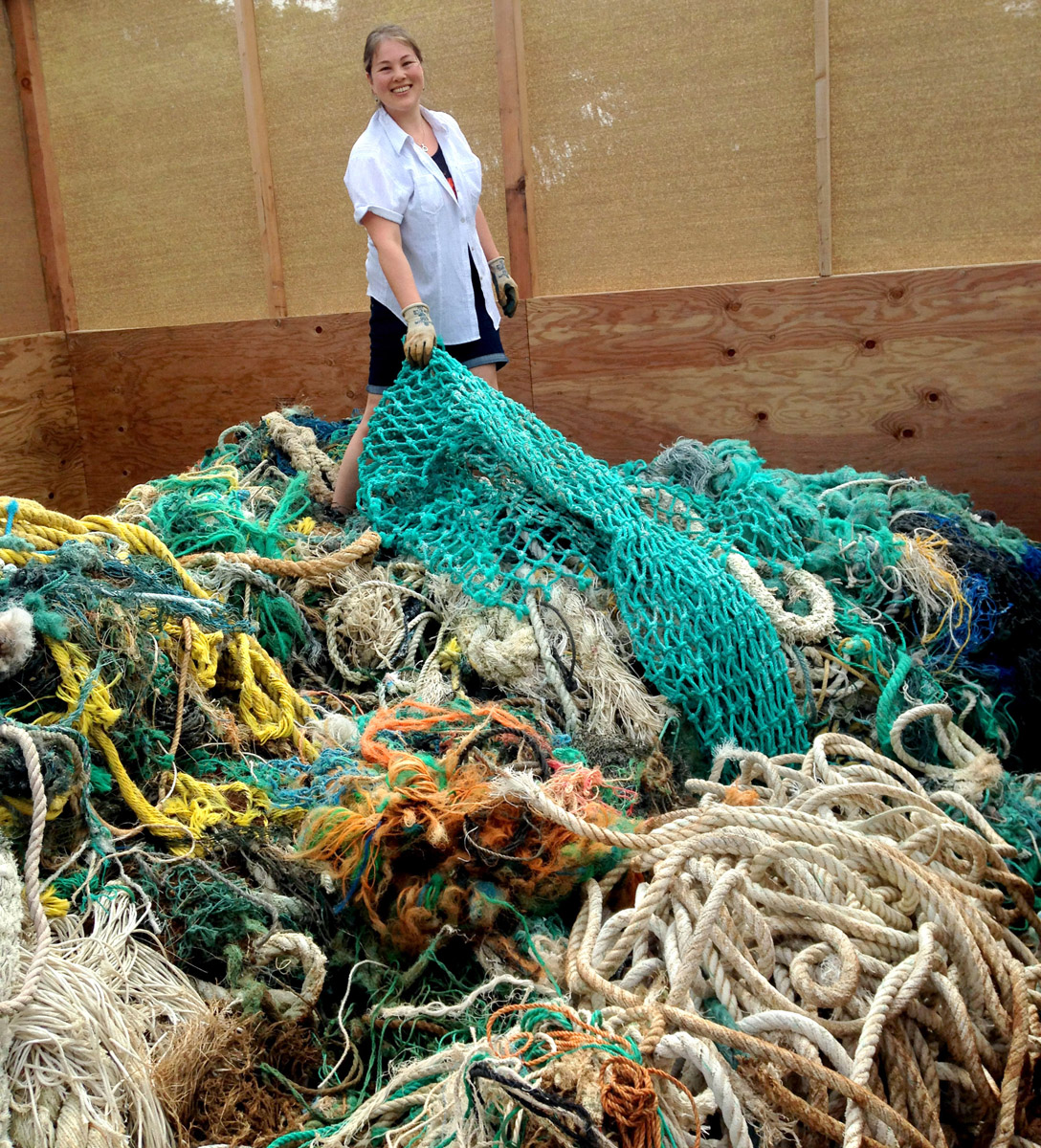 In the next bay over, hundreds of fishing floats and buoys were stacked in giant crates, collected from the same beaches in the past two months. 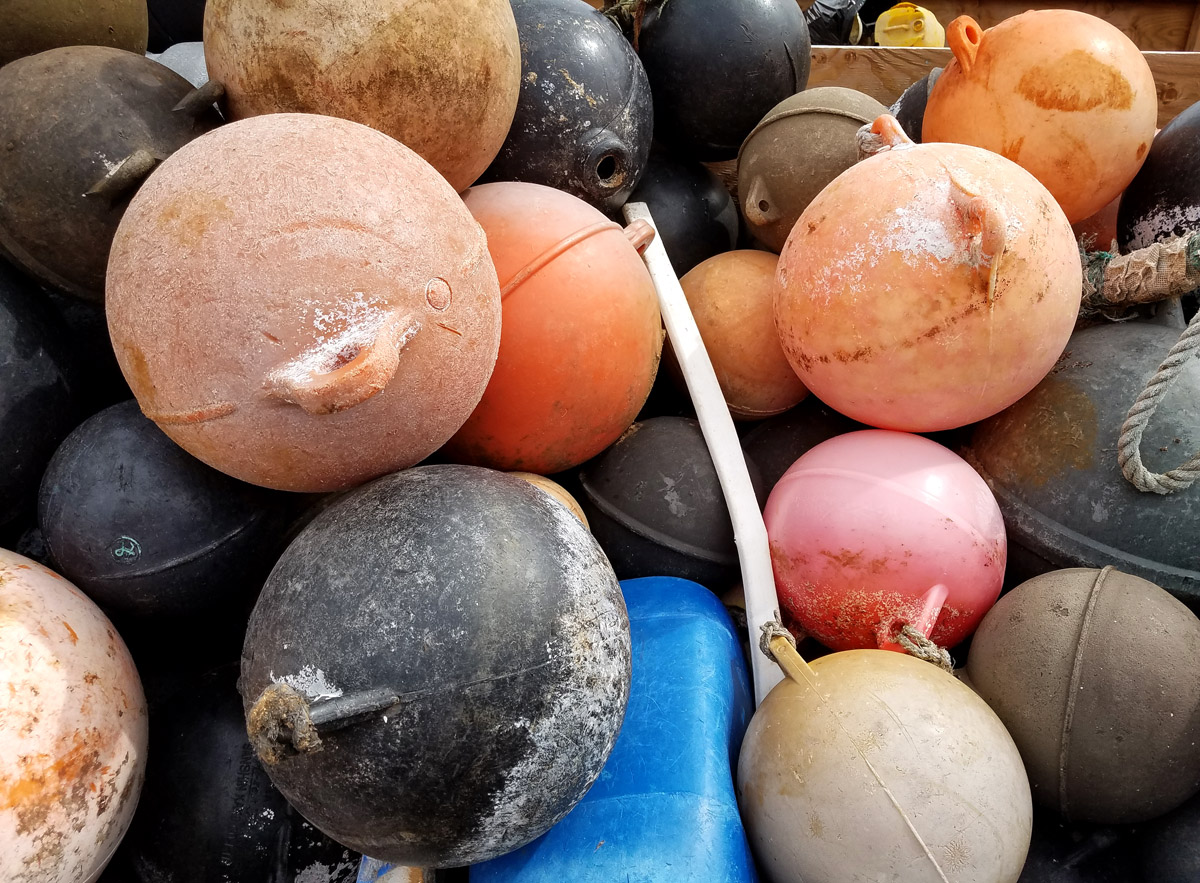 I am only beginning to understand the scope of the problem: seeing the huge mass of ocean trash washed up in just two months on one small island, having the blue rope disintegrate into tiny fragments at a touch, cutting apart the strangling tangle of monofilament. My rope baskets are not a solution to this massive issue. But having looked a bit closer at the source of the material, I am more inspired than ever to keep on making them. The entire making process is a kind of meditation: collect, clean, untangle, unwind, stitch. Order from chaos. 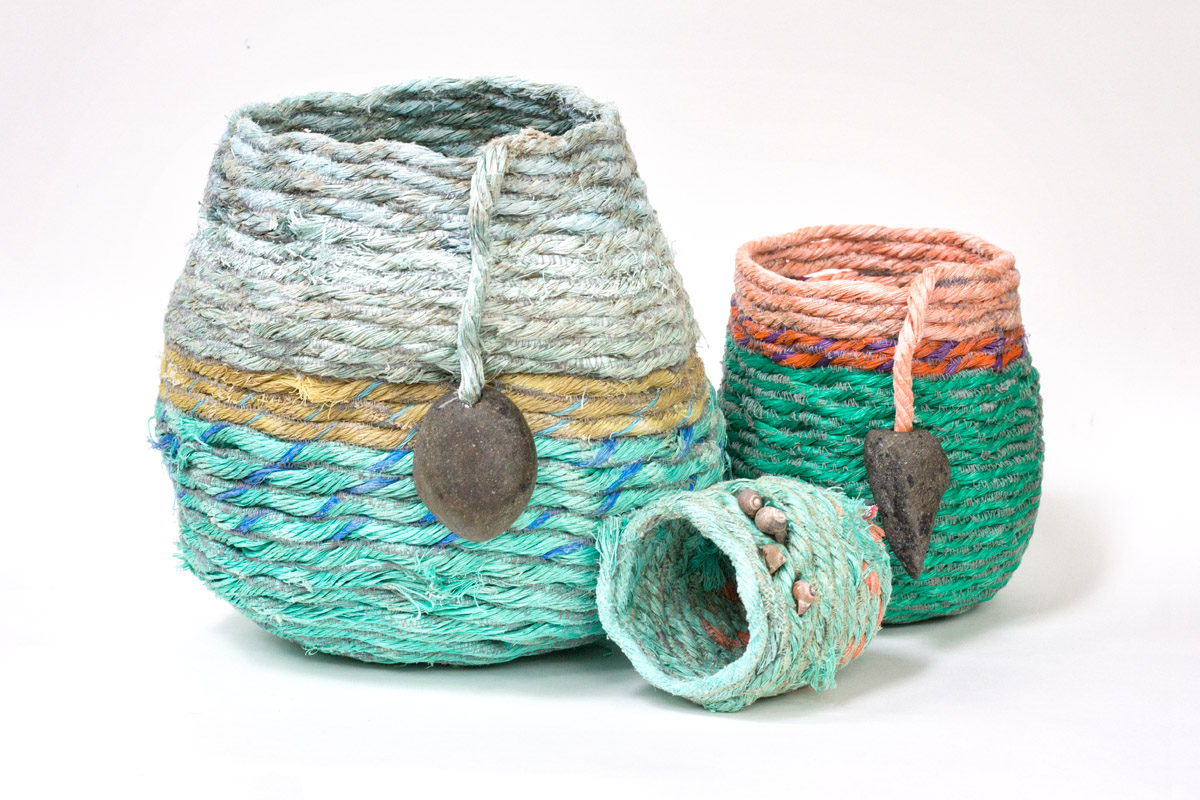 My third set of rope baskets will be available this summer. The first and second sets sold out fast, so I am now taking pre-orders for the third series. A portion of the proceeds will benefit the following ocean conservation organizations.

2 comments on “Order from Chaos”