I spent the week between Christmas and New Year’s in Los Angeles, California, painting a two-story beach path mural on a busy street corner in Santa Monica. The mural is located at 3000 Lincoln Blvd on the corner of Pier Ave, near the Venice city border and 1 mile from the beach. Lincoln Blvd is a major street that is currently being revitalized with many new public artworks.

The “Lincoln Pier” mural creates a connection from busy Lincoln Blvd to the ocean one mile west. The mural shows the oceanfront bike path connecting the cities of Venice and Santa Monica, framed under an archway inspired by iconic Venice Beach boardwalk architecture. The project was commissioned as a memorial to the owners of the building, Frank and Cathie Gaudiano, by their descendants. 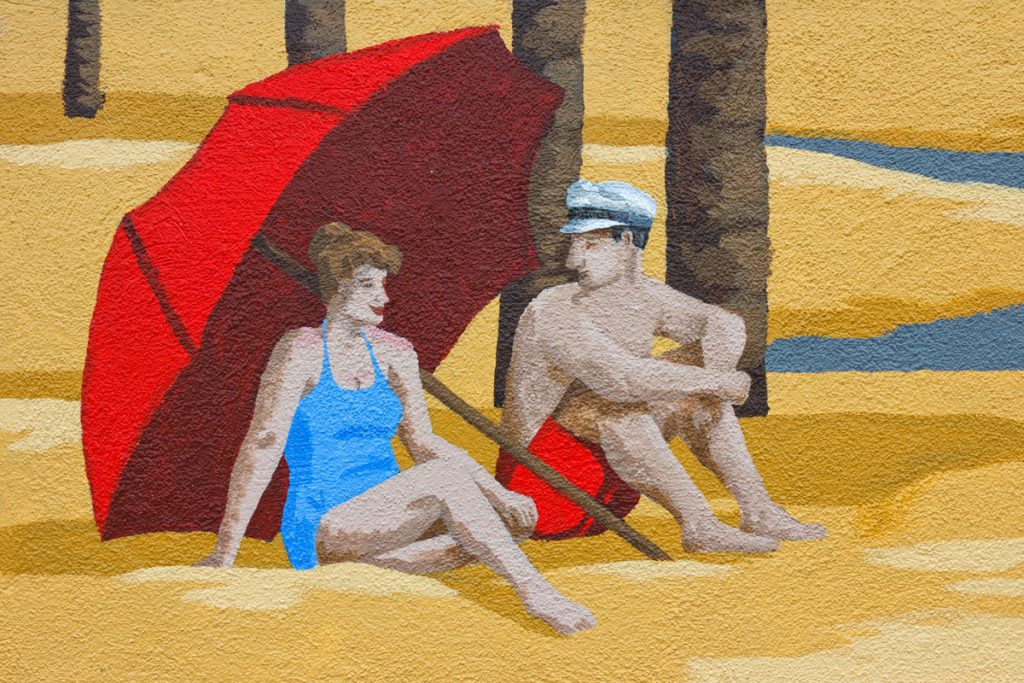 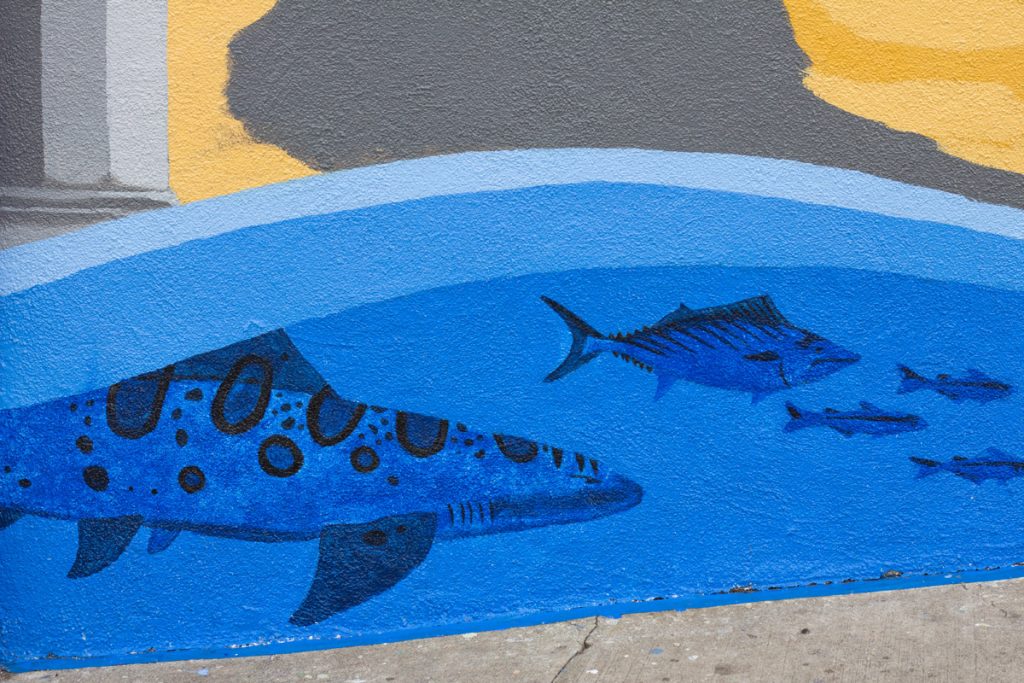 The Gaudianos were residents of the area since the 1940s and second-generation immigrants from Italy and Ireland. After their marriage, the couple left their homes in New Jersey and New York and drove west to begin a new life without the cultural tensions between Irish and Italian immigrants. They settled in Venice, California. Frank spoke fluent Italian, allowing him to communicate well with the area’s Spanish-speaking residents. Their TV repair shop was located in this building from the 1960s until Frank’s death in the 1980s. The family has memories of fishing in Santa Monica Bay.

Before arriving in Santa Monica, I spent several days preparing a full-scale 16′ x 11′ outline drawing on butcher paper using a 12″ square grid. My first day on site was spent re-creating the grid and outline drawing on the building’s wall. 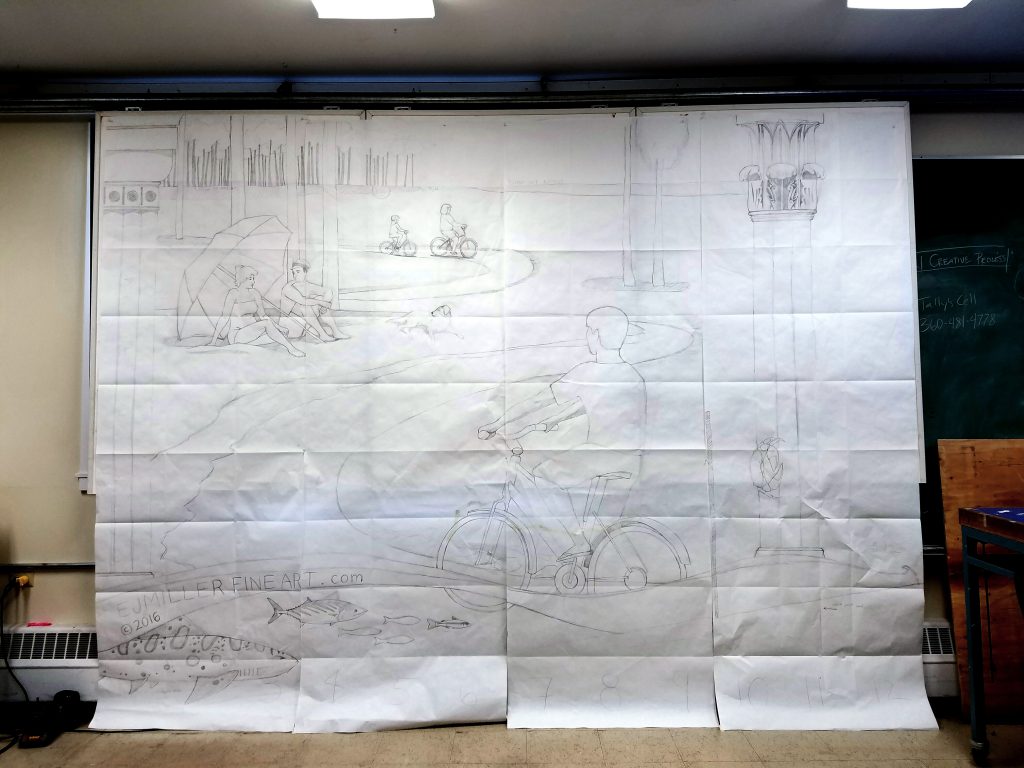 My vision for the mural was to use large blocks of bright color with almost no shading or linework, to give the image impact from a distance. This made it possible for much of the actual painting to be completed by assistants. Over the course of the week, 15 people came to help paint, most of whom had a connection to the family. I divided my time between preparing and managing their work, and doing detail and cleanup work.

Day 1 – the first round of assistants.

Our biggest challenge was figuring out how to access the upper part of the wall, 9 feet to 16 feet above the ground on the slope of a hill. We ended up using a simple scaffold with leveling jacks on one side and wheels at all four corners. The scaffold extended out into the sidewalk – city property – so a permit and signage for sidewalk closure also needed to be obtained. 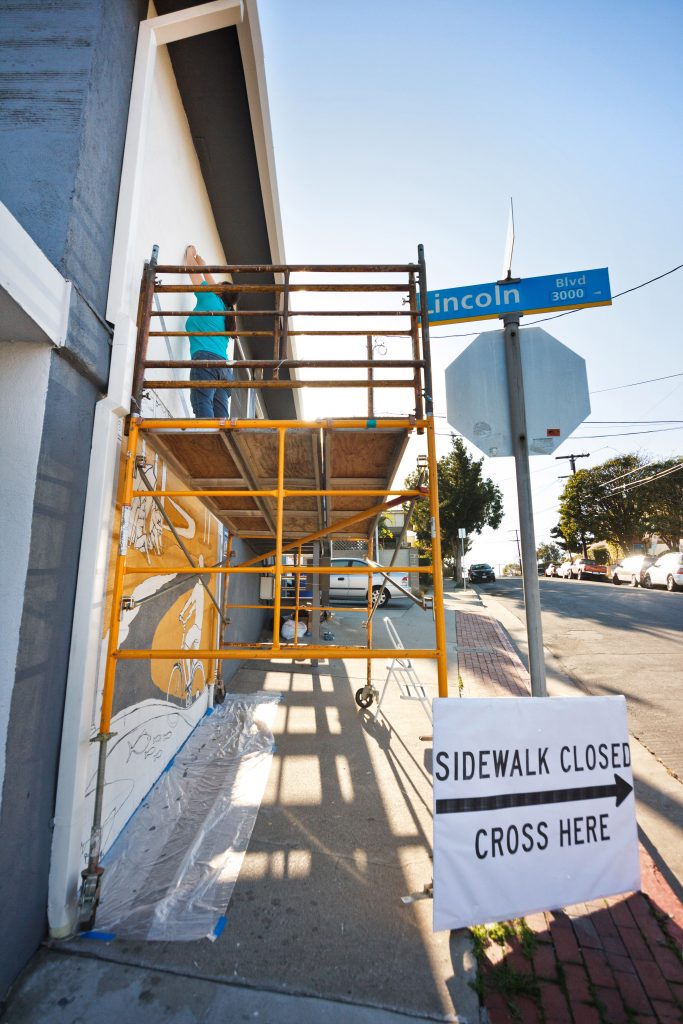 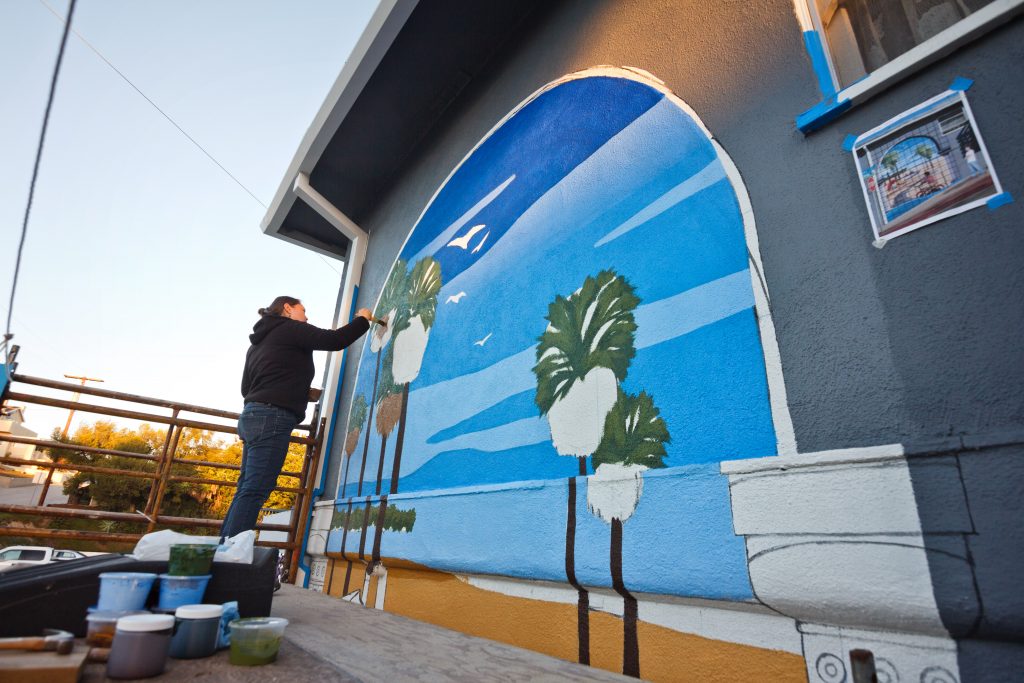 This was my first large-scale public mural, and it was rewarding in so many ways. I loved providing an opportunity for so many people to be part of creating a significant and permanent art project. It was also wonderful to see different people every day passing by with a thumbs up or a few words of encouragement. I saw a lot of city pride in Santa Monica. Locals are noticing and enjoying all the new art along Lincoln Blvd. Murals are for everyone – and all kinds of people enjoy them. 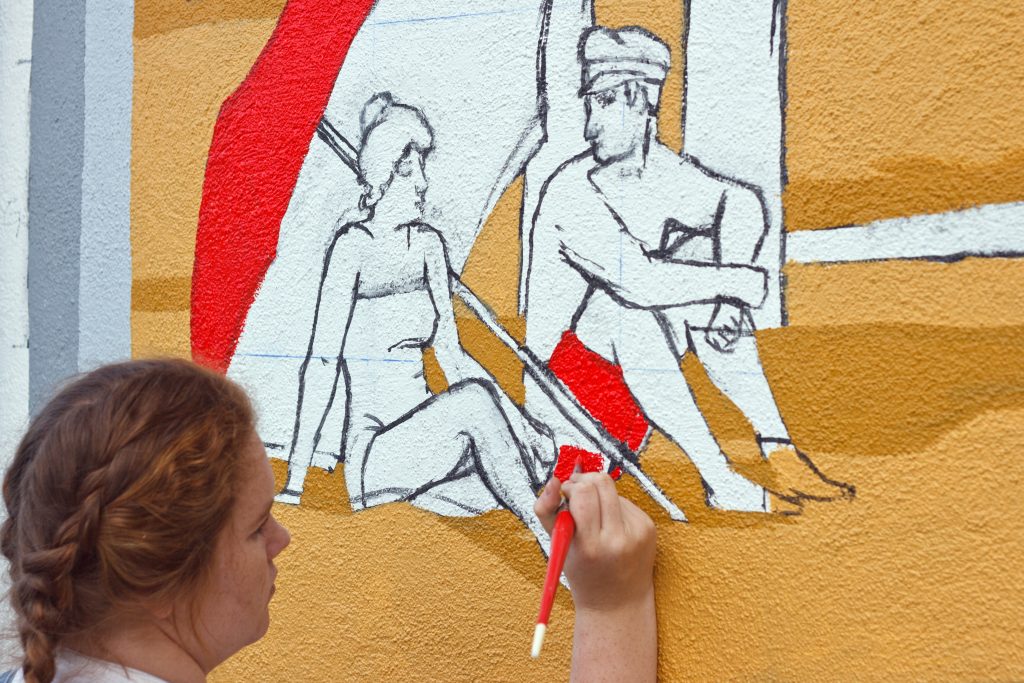 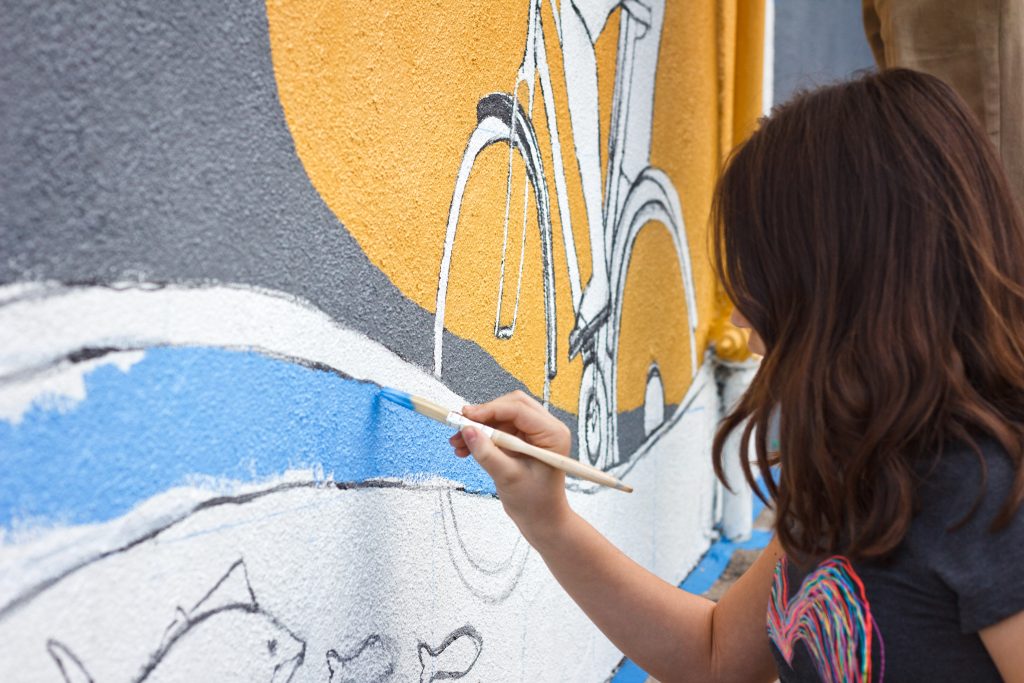 Assistants ~ thank you so much for your help! 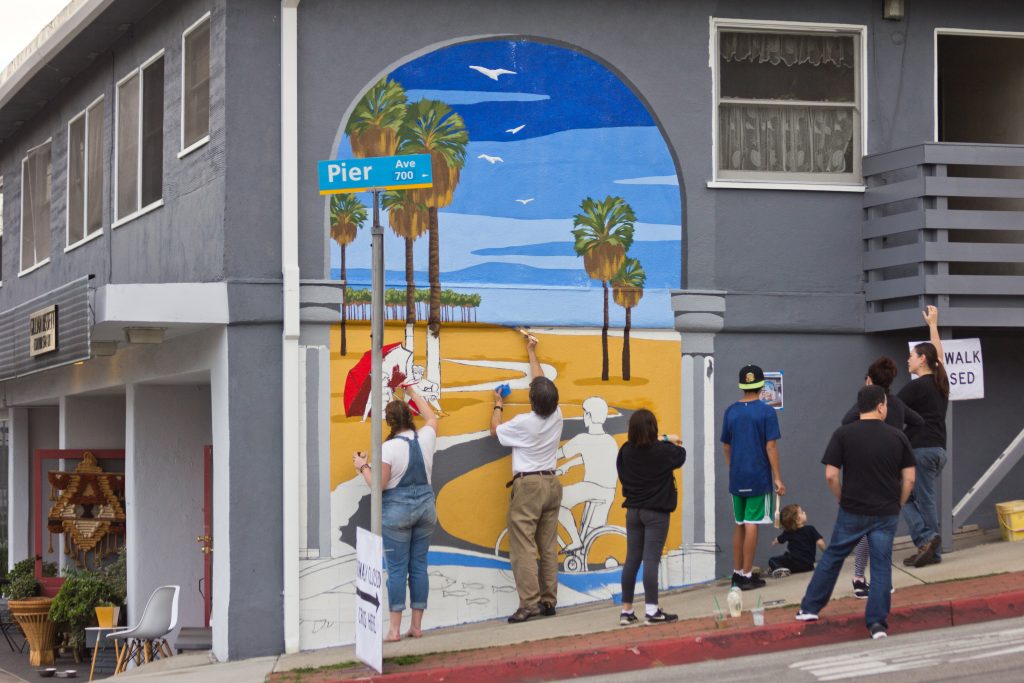 Click here for lots more photos of the week-long mural painting process, and all the assistants!